Thanks to all on SeeSat-L who provided information and programs that made this page "award winning"
for the week of Oct 27, 1997

This photo was taken by Chris Dorreman on Sept 20, 1997 at 19:10:23 UT. It is believed to be one of the earliest pictures taken of a unpredicted (before any Iridium flare prediction programs were published) magnitude -8 (estimated) flare produced by Iridium 12 (NORAD 24837/COSPAR 97-030-B). Details: 1 minute exposure on Fuji chrome 400ASA. Zenith is UP with sat moving left to right. Exposure started at magnitude 0. Flare was bright enough to cause a reflection on the right side of the frame. Stars are on the CYG-LAC-PEG border (northwest is up). Further details can be found in a SeeSat-L message by his father Bram Dorreman. (this image (c): Chris Dorreman)

Additional photos can be found in Part 1, Part 2 and Part 3. 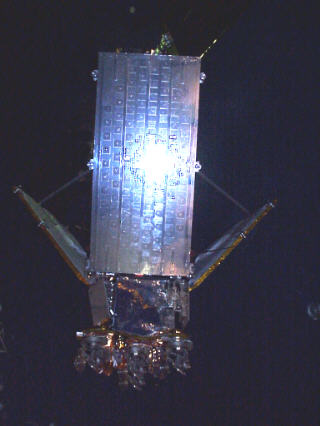 Here's the reason why the flare is produced.

A relatively small communications satellite has been providing spectacular visible reflective flares/glints to observers on the ground (*refer to respectfully submitted definition for flares/glints).

With only a normal brightness of +6 magnitude (binoculars are useful to spot it), occasionally some of the Iridium satellites provide reflective flares/glints of magnitude (-)8. For comparison, Venus can be as bright as magnitude (-)4.9, thus reflections can be up to 30 times brighter than Venus. The flares/glints can last anywhere from 5 to 20 seconds before the satellite once again becomes almost invisible to the naked eye. Some flares have been observed during the daylight hours which is very unusual for reflective glares from satellites. Knowing where to look to observe these flares during the daylight hours is essential.

The mechanism providing the flare/glint are the Main Mission Antenna (MMA) on each of the satellites. These antennas (of which there are three- 120 degrees apart, 188 cm wide x 86 cm long x 4 cm thick each) are highly reflective aluminum flat plates (treated with silver-coated Teflon for thermal control) that are angled 40 degrees away from the axis of the body of the satellite. Here are detailed views of the satellite taken at the NASM. Daniel Deak also provides photos taken at the NASM.

The axis of the satellite body is maintained vertical to the Earth's surface. It is the maintenance of the operational satellite's axial and longitudinal position that allows the flares to be predicted.

On November 15, 2000 it was announced that Iridium Satellite LLC will take over the assets of Iridium LLC and maintain the constellation in orbit. Details of the purchase can be found at SpaceFlightNow.Com .

The plate or MMA can provide a direct (specular) reflection of the sun's disk. This specular reflection is only tens of kilometers wide at the Earth's surface. In order to see a very bright reflection, the observer must be within this relatively small area. Prediction programs are available to determine this area.

The three sided (similar to an equilateral triangle) satellites themselves are not very large, approximately 4 meters long and less than one meter in width.

Alan Rohwer, a SeeSat-L subscriber, provided the initial construction details and provides additional information on the construction of the satellite which may account for unexplained reflections not predicted by the flaring prediction programs.

The flares/glints can now be predicted. A fully operational Iridium satellite maintains its axial and longitudinal position to within very close tolerances. Knowing the satellite's position, its orientation, the relative Sun angle to the satellite, the reflective properties of a mirror and the observers position on Earth, a program can be developed to calculate the projected specular reflection of the Sun from the Main Mission Antennas to an observer. Rob Matson provides additional information in a response on SeeSat-L.

*You will need to provide Iridium satellite elsets for these programs and links to them can be found immediately below.*

Some Resources For Orbital Element Sets

Here's the break down of a typical orbital elset .

Observers should not assume that all Iridiums will flare per Rob/Randy's programs. Since several Iridium satellites listed below are either tumbling or otherwise not operational, those can NOT be predicted. The mean motion that signals a fully operational satellite should be 14.3422 revolutions/day.

Heavens-Above in Munich, Germany now provides flare predictions. Because the flare effect is fairly local in nature, the user should provide their best known coordinates in order to observe the flare successfully. This site has a large coordinate database to allow the user to determine their coordinates.

Observations and comments posted by SeeSat-L subscribers can be found either in the archives or by joining the SeeSat-List.

Below is a listing of all the Iridium satellites assigned to their respective orbital planes. Motorola had provided an official list of Iridium Satellite Nomenclature on or before December 17, 1998. Motorola is no longer involved in the maintainance of the satellite orbits. The Boeing Company is now providing this service.

There are now 6 separate orbital planes of operational satellites spaced approximately 30 degrees apart. In the list below the different groupings or planes are identified by their Right Ascension of Ascending Node (RAAN) .
There are three categories of satellite identification. First is the satellite catalog number, the international designation, and the common name number. "Slot" refers to Motorola's positional assignment of the designated Iridium satellite in each of the six planes.

Note: The visual characteristics of all the satellites are not included below but are for the satellites that have been previously reported inoperable. You can find links with more up-to-date status here.

An unoffical status page is maintained by Rod Sladen.

The expected lifetime of a satellite is 5-8 years.

In the first week of September 1997, China launched two dummy Iridium satellites (cat. no. 24925 and 24926) to test the launch dispenser. The launch appeared successful. These Motion Flight Simulators (MFS) satellites are not normally included in the Iridium Group elsets.

Denis Denissenko from Russia has some pictures of Iridium flares observed near Jupiter taken from Moscow.

Jim Nix maintains a web site that has a lot of Iridium flare photos.

Matt Lowe provides photos of Iridium and other satellites.

Bjorn Gimle provides analysis of Paul Maley's observation (see image above) plus a picture of a *daytme* iridium flare and additional links.

Further details on the Iridium constellation, together with a multitude of links, can be found on Lloyd Wood's satellite constellations pages.

SpaceRef.Com reviews the history of the Iridium communications satellite.